A trip to the tower

I was off work a couple of days last week to visit London with some friends, for most of us it was the first time we’d made a trip to the capital for either a long time or at all. The trip was interesting for a number of reasons; primarily the things we saw on our visits and secondly how often we used app’s and mobile web to plan where to visit and how to get there.

Taking in some of the interpretation panels in the Tower

I’d read an article someone had linked about guidebooks facing extinction a while back, but it hadn’t really hit me till I was in London over the weekend how true this statement was. We were planning on visiting some places which the guidebook told us were shut over the weekend, a quick search of google told us they weren’t. The guidebook had only been published 4 years ago; however it was already out of date.

Having made our plans, our next stage was finding somewhere to eat. Where traditionally we may have looked through a guide or the information in the room (we looked at this after our phones), instead out came the Iphones. Using App’s like Yelp and Around Me, we were able to quickly not only find a restaurant we’d like to go to we also were able to look at tips and reviews people had left about the place.

We eventually settled on a Tapas restaurant down the road, which was again quite interesting due to it’s door handle. I’ve attached a picture below; 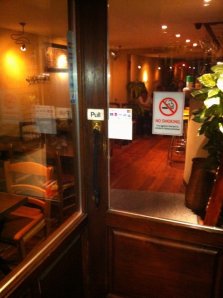 Even something like a door handles can become a talking point.

What was interesting about the door handle was it became a sort of social object when one individual mentioned ‘how much they liked the handle’ it inevitably started a conversation among us about the handle too! It was interesting to see how such a small thing can create such interest in people!

A bedroom fit for a king, inside the Medieval Palace

Our trips during the day took us to the Tower of London and the Imperial War Museum, again using our Iphone to check opening times, the nearest tube station etc. I thoroughly enjoyed both visits; I particularly liked the interpretation of the medieval palace at the Tower.

In harsh conditions to punish them for wrong doings - 381821 votes

I’ve tried the App’s out in lots of different places, and certain ones did work a lot better in London than other places. Polesden Lacey currently has 4 tips on Foursquare, one is a general comment, two are largely positive and one is negative. However with the growth in the numbers of Iphones and use of Android OS etc, I’m sure using App’s to find out this sort of information and leave comments and tips will become the norm. Of course there are still some places where getting a signal is not brilliant, one of the issues we have at Trust properties.

Our Iphones finally fail us on the Tube in London.